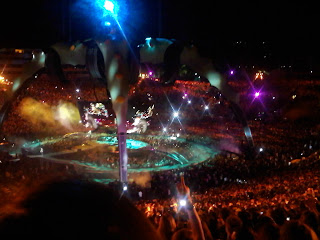 I saw the U2 360 tour on Sunday & let me tell you it was the best concert experience of my life. There are no people cooler than Bono & the boys.

Part of what inspires me about U2 is the genuine heart all 4 of them project & how they want to actually do something good with their influence.

I amy not be a musician but I'd really like to model myself after them. Bad intentions.
Originally uploaded by Maria takes pictures.
Since blogging a few weeks ago about not having a lot to report I have some semi interesting things to report. Figures it always happens that way.

The first interesting bit of news is that I have a potential job interview. I say it's potential because they want to schedule a phone interview with me and it hasn't been confirmed yet. The job is not a film job, but it is a more creative job and that would be awesome - to be able to use some of my skills and no mroe customer service? It's nice to even jsut be considered.

The other bit of good news is that I seems to have tapped into some bit of inner creative spirit again. I don't know if this is because of the potential job prospect, watching Supernatural at an unhealthy pace, the upcoming holiday season or just God providing me with the juice again but that's helped me tremendously. It's changed my attitude about submitting to festivals some, and hearing about rejections or not hearing anything at all - there's still a lot that can happen with END and I just have to keep trying. Wether or not anything happens with my film, it was a first feature effort and there will have to be a second - as much as that thought exhausts me mentally and physically.

Halloween is coming up as well and I am proud to say I am very excited that I have plans. I don't hav eplans for the actual day of (I'll probaby continue my tradition of the BtVS halloween episodes and throw in some Supernatural) but the weekend after my surrogate niece is celebrating her 16th birthday and it's a costume party. It will be a lot of fun and I cannot believe she is already 16! I swear when I first met her boys weren't even something she thought about and this year she already went through her first boyfriend!

The kid is going to be Snow White for her birthday party as the theme is fantasy and she's asking everyone to come as their favorite fantasy character. I wanted to come as Lois Lance (since I can't be Superman) but that really didn't seem to make much sense as I can't get a Superman to come with me, so I went with plan B. I won't be a specific character, but Star Trek defined my childhood so I got the classic Trek girls uniform, gold of course as I need to be a command officer.

Anyway, while October has flown by and I still wish I had cooler announcements to make I guess I can just be glad that I am enjoying life right now and have some fun things to look forward to. 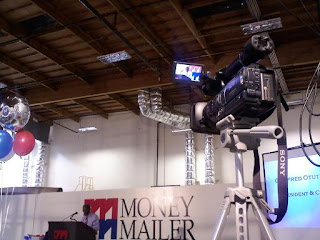 Last Friday I helped video the 30th anniversary of my company. While corporate video is obviously now what I dream of doing with my life it was nice to at least be enjoying what I was doing at work. However it did remind me that I still need my mac, a deck & some other accessories so I can play on my own.

I've always believed in the starving artist cliche. Things have to be worse before they can get better & honestly there is a lot of craziness going on in my life right now with family drama, work, END & the million other things that keep coming my way. I am still confident that I am doing what God wants me to do but I am exhausting myself.

I am hoping that perhaps soon I will get some other projects or good news that can be shared & enjoyed. We will have to see what time brings. 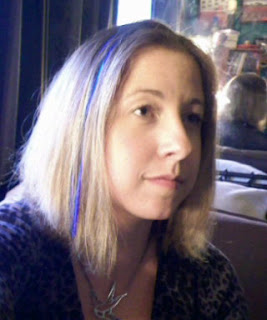 I got my hair cut Friday & I love it. The blue is clip in but I've been feeling the need for an edgier\cooler look for awhile which is hard with curly hair but I have a fantastic stylist.

Not a lot has been going on lately. Christopher assures me he'll have another script for me soon but my brain is so exhausted from END & work that I'm having trouble being excited for that. To try to jump start my creative brain I've been trying to watch good films in the theatre & decided to catch up on Supernatural on dvd as the current season of that show is completely brilliant to me.

I'm also excited for a fun project to do for Halloween & I just shot our corporate anniversary...