Whether 2009 or 2010 is the start of the new decade, I am glad that the numbers on the calendar rolled over and a new year began. I was mentally ready for it. As I’ve already posted several times on this blog, 2009 was a heck of a year.

Yesterday, January 27 was my one year anniversary of being laid off. A lot of people discount my experience when I was laid off because I was hired back after only about five weeks, most people refer to it as my “extended vacation”. This aggravates me to no end. I was not “on vacation”, I was laid off and experienced all the mental trauma and damage that comes with that – trauma that doesn’t go away simply because I was hired back.

It’s true that I was quickly able to be emotionally over my job, but that wasn’t because being laid off didn’t hurt, it was because the job I am currently doing is not my passion and my heart has never been in it. This did not make the flowing weeks easy.

I worried constantly. I worried that I wouldn’t be able to make my car payment and I’d lose my car. I fought with the unemployment system as they continually lost my application. I sent out dozens of resumes, applied to a countless number of jobs and heard nothing. Everyone around you tries to be sympathetic and I am incredibly greatful for the people that helped me but that in itself gets tiring, to know you are always the example of pity when you are with certain people. No matter what you do there is always also the feeling that you can’t shake that there had to be some way this could have all been avoided and your subconscious likes to tell you that other people deserved this more than you did. Even if you try not to listen it pops into your mind.

When I finally got the call by HR and the VP and offered my position back I can tell you I did not want to go back. Not only was I over this job, the management had already essentially told me I was unnecessary to the company and that is a very difficult feeling to put aside. Every emotion and instinct I had did not want to say yes, but in the end I said yes because life prevails. I do still have a car payment, a student loan payment, a phone bill and in general the things life throws at you that all require a job.

I did everything I could to remember that God was in control of the situation not me. One thing that helped me greatly was that I took a photo and posted it on flickr; it was the day after I was laid off and as art always does it helped me to center myself and my emotions and remember that a plan would unfold.

Since being back at my job and annoyed with those telling me I was on “vacation” I’ve slowly come to realize that while in the past twelve months I’ve outwardly lost the effects of being laid off I still have emotional and mental scars. I don’t know if all of them can be healed while I am still employed by the company that got rid of me, but I know God can do great things to heal.

One of the things that started the healing process, as strange as it may seem, was going and seeing Up In The Air. I know art and film usually reach me in a different way than they do the masses since that is my passion, but the chords of this film resonated with me in a cathartic way I am not fully capable of explaining. When I walked out of the theatre I realized I felt better about my situation than I had felt in months.

As the anniversary of being laid off approached I could feel my angst and anxiety rise all over again, so I decided to take action. Not only have I been applying for new jobs again, but I decided I needed to take another picture. I don’t know if this one will have as great an impact on viewers as my original, but I am hoping that at least for me it will provide some small amount of healing. 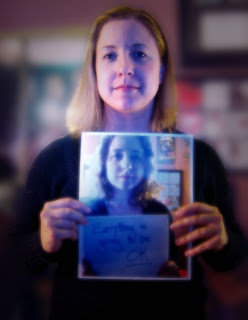