"La Collina"
Originally uploaded by Andrea Pompilio
I would have to say that the most annoying thing about this stage of my “career” is being so in between everything. It’s really hard to keep your faith when you don’t have anything concrete on your side.

I know that I want to make films for the rest of my life, but I have no idea if that will happen. I am going to try my hardest for it to happen but I have no proof that it will.

I have only hope and faith that God wouldn’t have given me this passion if I wasn’t meant to be doing something with it. God has not directed me to another path, has not told me that I’ve wandered astray – God has not done anything but build my passion and drive to be an artist.

As much faith as I have it’s still hard, especially when I hear my friends having doubts; I know that they are supremely talented and just need to keep trying like all of us starving filmmakers, but I can’t help but have sympathy for them. I know a great deal of my worries are easier to deal with for one reason – I have God and they don’t. When I don’t have a job that I wanted, when something doesn’t happen that I think should have, when the day job throws a curve at me I know that I’m not in charge of things, God is and that releases a burden from me. For me that makes things make sense in a way that I don’t think it does for my friends. I see order in the chaos because I see God directing it all – I may not know how or why, but He’s there. I wish that my friends had that too. Hollywood
Originally uploaded by mrbosslady
Well, I am still sick and yet I have not been calling in sick to work though I probably should be. Call me crazy for trying to save my vacation time for the holidays. So while I try to get motivated enough to do some sort of physical movement other than type (and it doesn’t look like that’s happening) I have lots of time to think.

I keep saying that I want my life to change, and I do in certain ways – I want to be a full time director, I want to make movies. However, I think I need to be careful to thank God for the ways my life has already changed, or been changed by the things He has thrown in my path – things I never expected.

I never expected to go to film school; out of nowhere God revealed to me that he did have a plan for me and it was movies, I’d had blinders on. So I did what an uber-geek like me does and researched and applied to film schools. For the first time in my life I had a purpose, a goal and an outlet for a passion that had been consuming me for years.

I expected to go to UCLA film not CSULB but God had other plans. I got waitlisted at every school I applied to except CSULB. So I went and was none too happy about it. Yet it was an amazing experience that I can never regret, the only thing I can regret was that it seemed to short. God knew what He was doing and put me in a place that I never would have imagined myself being and I think I am a better artist because of it. I know I am a different artist because of it.

I spent my senior year listening to all the exciting things Paramount was doing, so I told myself to try and get a job there after I graduated. I did it. I would have never expected it but I became a studio page – audience wrangler and tour guide and I loved it. God again knew what He was doing; I spent a year becoming comfortable around a lot, learning I could be a public speaker and getting over the last vestiges of my shyness. I am a more confident person because I was a page. It sounds stupid but it was the best learning experience of my life. It didn’t lead to the jobs I’d hoped for, but that doesn’t mean it wasn’t well worth my time.

I worked in a place I commonly refer to as hell; I didn’t want to , I didn’t think I was supposed to but I did, and God blessed me. He blessed me with some of the best friends I’ve ever had in my life. He taught me too that I need to keep pushing to achieve my goals.

I made three short films in a period of 2 days; God blessed me with a cast and crew that were so devoted that we pulled it off and I learned so much more as an artist than I could have otherwise.

I just shot a feature film in eight days; I never expected to do that, and do it well but so far it looks like we did. God blessed me with a cast, crew and friends that enabled me to do that and hopefully exceed at it.

I know it’s too early to tell where God is taking me next, but I can only hope that He keeps me where He wants me because even though I like to complain I know it’s been a pretty good trip so far.

I'm tired. I'm sick. More than anything I don't want to go to work tomorrow. I just want to curl up in bed and watch movies; right now I have Dead Alive and The Exorcist from Netflix. I am trying to do all horror movies from netflix this month.

I am having Christopher call our editor today. I need to make some serious inroads in editing as I am getting itchy feet and want to have things more done than they are now. I trust him, I just want to see the forward movement my self. I'd call but I am about to start coughing my head off so I'm going back to drinking water and staying in bed.

Okay, so everyone is always so down on the fact that it's so hard for people to become directors, or that no one can become the next Kubrick (or another iconic director). It annoys me. I get that it's hard. I get that not everyone can do it.

Wanna know my take? I've always thought this and it has been my defense since college.

It has to happen to someone - so why not me?

Seriously, if no one ever tries to become a director, to make the movies that matter no one will become the next Kubrick or even break into the industry. You have to try if you want to make it.

I will not give up, no matter who naysays. 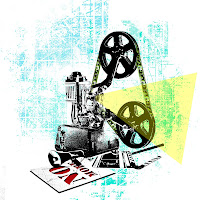 So this would be my first entry, and it’s probably going to be different than my future entries because I want to make sure my background and who I am is understood.

I am a resident southern Californian, in my mid-twenties and I have been enraptured by the movies since I was born –at least that’s what it seems like. However, I didn’t realize that I could actually make movies as a career until I was 19. It was then that I realized I wanted to direct. Don’t think that this came out of the blue, no I’d been writing, painting, drawing, creating, doing theatrical make-up, and helping my screenwriter brother for years so the only new thing was the revelation that I could make movies my life.

As such I went to the film program at Cal State University Long Beach and graduated with a hellva GPA, and spent the year after graduation working as a page for Paramount Pictures. Those three years at school and Paramount changed my life and I am forever indebted to God for making me go through all of the stress, pitfalls, joys and experiences that were born out of that time. I would not be the person or director I am if not for it.

However, becoming a director is not an easy thing to do. Getting into the industry is not an easy thing to do. I have had great professors and mentors that believe in my talents as a filmmaker and one thing that stands out is how they told me if I want to be a director then I have to make a movie; I can’t wait for someone to give me a film, or notice that I perhaps might want to direct – I just have to do it. So, being the tenacious individual that I am I’ve made that my goal. I’ve made a movie, I’ve made short films, and I’ve gotten a team of trusted people that we all have the same goal – to make our mark on the entertainment industry.

If I fail it will not be because I didn’t try. If I don’t make it to my goals it will be because this is not what God intends for me. However, God has not revealed to me that I am on the wrong path, so I am continuing to push, to try and get noticed, and to try to break out of the monotony of the “normal” and do what I love.

That is what this blog is dedicated to. My trials, tribulations and other encounters as I strive to fall in line with God and get where I think He wants me to be.