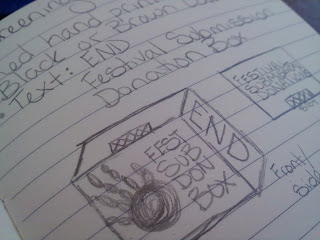 I have a coworker that also wants to break into film production, she and I actually discuss it a lot.

Yesterday she was lamenting to me about not being able to get a film job & saying how she wasn't working on anything and wasn't willing to drive to or live in LA. This drives me nuts.

I have known far too many people with my aspirations who don't do anything to forward them and then wonder why they can'achieve waht they want. I have never wanted this to be me.

I found an entry from 2007 in my diary lamenting my non-director status. I didn't know that less than a year later I'd have been pushed by God to shoot my first feature, but I did.

In the past year I'Ve worked my butt off and now I have a finished feature and hopefully a few fests to show for it.

If I fail let no one say it's because I didn't try.

This message was sent using the Picture and Video Messaging service from Verizon Wireless!

To learn how you can snap pictures and capture videos with your wireless phone visit www.verizonwireless.com/picture.

Note: To play video messages sent to email, QuickTime� 6.5 or higher is required.